This autumn we noticed some liveliness on social network page of the International Exhibition of Calligraphy participant . And the reason was far more than just pleasant: her artwork "Weaving Words" has been selected by the jury of the National Argentinean Art Textile Contest and will be exhibited during the months of December and January in the Palais De Glase Museum in Buenos Aires, Argentina. Of course, we couldn’t miss a chance to congratulate her take a short interview with Marina to know more about this stunning artwork.

How did you get such idea? Maybe there was something that influenced you?

The idea came quite a long time ago. In my paintings around the mid 80s and 90s I used mixed media and sowed or glued found objects to my canvases. I’ve always had a special taste for ancient objects, noble woods, found objects in nature (stones, shells, woods) and the marks and patinas that time leaves on them.

When I discovered calligraphy I added all this background work to the new discipline.

My studio is full of found objects that eventually will take their place in my artworks. Among them there was a small boxmade of nice cedar wood that was originally a cutlery drawer which I used for my first artwork(see attached file). In my last year solo exhibition this art work was the cover image of my flyer and catalogue, and to my surprise it was sold even before the opening.

What was the purpose of this work?

Every year a national art contest is held in Argentina which includes most of the artistic disciplines such as painting, sculpture, etching, ceramics, photography, textile art, non traditional materials and techniques and installations. I found out that I could slip calligraphy within the textile arts playing a metaphor using words like stitches and text as fabric. Last year’s contest I was accepted with my artwork “GrafiaTextil” (Graphic Textile). 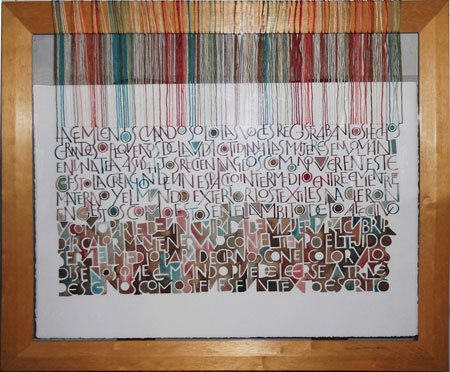 So when the time to participate was announced this year I though of reinforcing my idea of the small box. I wrote a text about “Weaving Words and Weaving Dreams” and used a type drawercase I’d had in my studio for several years. In this new work I went further in my metaphor trying to find similarities between the textile arts and bindings where sowing was used. I made little books using Coptic and Japanese bindings. I delivered the work and hoped for the best and I was lucky to be accepted.

How long did it take?

Once I had the idea the process was pretty fast. I started working on the calligraphy. I had previously deduced a writing starting from the Cooperplate or English handwrite paying much attention to the counter shapes or space within the letters and the lines of text, and I found interesting new shapes. (Examples of this alphabet maybe seen in the artworks that form part of the International Exhibition of Calligraphy and Contemporary Museum of Calligraphy in Moscow and the Hans-JoachimBurgert’scollection of calligraphy instituted at the AkademiederKunst in Berlin).
Later,I worked in the small bindings and embroidered the cover of the book and the other small pieces. I think the whole process took around three months.

Have you made it “in one breath” or there were such moments when you were about to stop?

I made it in one breath; I was pretty confident and clear of what I wanted to achieve. Perhaps what took me more time was the final assembling of the whole work. Initially my idea was to find a piece of old furniture or at least a part of it which included a shelf where I could attach my type drawer and display my book, but unfortunately I couldn’t find it in the short time previous to the deadline of the contest so I went to the carpenter and had it cut in MDF. Then I assembled it and covered it with fabric.

Have you expected the award? What (or who) made you participate in National Argentinean Art Textile Contest?

To say the truth, I didn’t expect it, I wished it would happen. There are so many artists taking part in this contest that it is really difficult to getin. Besides, you never know what will the jury appreciate or price to be exhibited, but I was lucky this time once again.
This is a very prestigious contest. Each discipline is separately judged and exhibited for the term of a month in one of the best museums,strategically situated in the heart of Buenos Aires art district. Since the textile art show is the last of the year, together with the etching and ceramic disciplines, it will be in display during December 2011 and January 2012.

The Contemporary Museum of Calligraphy is a pride for the whole world and particularly for the calligraphic community. I passionately wish that there would be more institutions such as this in different parts of the world to give calligraphy its placewithin the arts. Last years exhibition in Novgorod surpassed all my expectations. It is evident that there is a strong tradition and a high respect for calligraphy in Russia. Unhappily, I cannot say the same for Argentina where it is practically unknown. On the other hand, I truly appreciate not only the Novgorod exhibition but also the broadcasting work they carried; lectures, demonstrations, guided tours for children and the advertising on mass media such as TV. It was a deep honor for me to participate of the event and I would love to be part of it again in the near future. It’s a pity it’s too far away from home for me to travel and attend the exhibition, but I never loose my hope to personally meet the extraordinary group of people that make this International Exhibition of Calligraphy and Contemporary Museum of Calligraphy possible.

Thank you very much!
Marina Soria 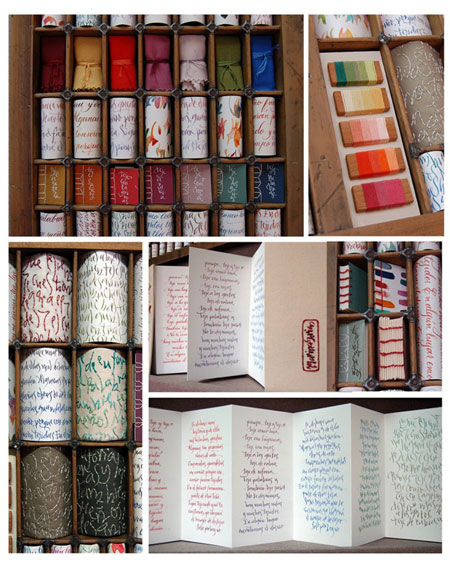 “Weaving words” from all angles

Source: . All rights reserved.
vk
vk
back back