A collection of most exquisite and rarely seen examples of Islamic calligraphy has gone on display at Sharjah Museum of Islamic Civilization on Wednesday.

'Rhythm & Verses – Persian Calligraphy' from the Islamic Arts Museum Malaysia includes Quranic verses, spiritual sayings, poems and official declarations as composed by the most famous Persian calligraphers of all time. 38 single page calligraphies dating from the 16th to the 19th century AD are on display, as well as a rare Qajar album of calligraphic masterpieces from the 19th century.

The exhibition is the first time these ornate compositions are being presented in the UAE. It is the result of the inaugural collaboration between Sharjah Museums Department (SMD) and the Islamic Arts Museum Malaysia (IAMM).

Rhythm & Verses runs from March 16 to June 18 to coincide with the Sharjah Calligraphy Biennale, when thousands of people congregate in the city to celebrate the beauty and significance of the written letter.

Manal Ataya, Director General of Sharjah Museums Department, said: “Rhythm & Verses is one of our most important exhibitions and is crucial for the appreciation and understanding of Islamic heritage in the UAE."

“The exhibition highlights not just the exquisite technical ability of the calligraphers, but their incredible intellectual and spiritual commitment to the practice, resulting in some of the greatest achievements in the history of Islamic art," he added.

Once keenly collected in the albums of prominent collectors and connoisseurs throughout the Islamic world, the selected art works offer a unique gateway to the most popular and distinguished styles used in Persian Calligraphy.

The pieces represent contributions by some of the most famous Persian calligraphers in history, including Shah Mahmud Nishapuri (died circa 1564 AD), Sayyid Mir ‘Imad al-Hasani (died 1615 AD), and Dervish Abdul Majid Taliqani (died circa 1771 AD).

Each of the pieces was conceived as a unique art work, the calligraphed text carefully designed to be pleasing to the eye, while at the same echoing the rhythm and musicality of its spoken equivalent.

Dr Heba Nayel Barakat, Head of Curatorial at IAMM, said “the title of the exhibition, Rhythm & Verses, was chosen specifically to emphasise the fact that in classical Persian calligraphy the ultimate aim of the scribe was to visualise and complement the technical and aesthetic virtuosity of the reciter and poet as well as the composer and musician."

The exhibition will include a series of workshops in which families will be invited to appreciate the calligraphies on display and then recreate the styles under the guidance of expert tutors. 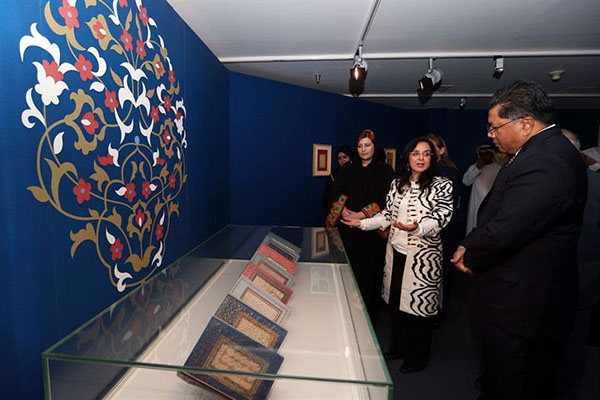