Everyone in fashion already knows Nicolas Ouchenir, at least by pen stroke. As Paris’ most in-demand calligrapher, he has thousands upon thousands of envelopes to his credit—and that’s just for this recent season’s events.

On top of his expansive calligraphy business, Ouchenir is also a voracious reader, a passion that collides with his art in swirls, spatters, and excerpts for 20 or so “signature portraits,” now on show at Colette. (The opening party, meanwhile, will happen next week.)

“I’ve always loved drawing, but one day last November, Thomas Erber called me for his Cabinet of Curiosities [exhibition] in Bangkok. The thing was, I had to turn it around for the next day,” Ouchenir recalls. He delved into the book he was reading at the time, Friday, or The Other Island by Michel Tournier, and came upon a phrase about “dancing, wild with desire, bodies interlaced.” Inspired, he dashed off Erber’s calligraphic portrait.

The sequel to that idea is a series of fashion portraits wrought from selected quotes, with each subject chosen by affinity and each quote by instinct. For his friend the Parisian It girl Jeanne Damas, 99,300 Instagram followers and counting, Ouchenir lifted a passage from A Moveable Feast. “That’s because she is a true Parisian, she is pure, and she doesn’t need to put on airs to exist,” he explains. Other renderings include a portrait of his partner, accessories designer and ANDAM finalist Hugo Matha; Julianne Moore; Karl Lagerfeld; and Carine Roitfeld. “She represents entirely the love I feel for women because she represents timeless, sexy glamour. She’ll be an icon forever,” says the artist of Roitfeld. 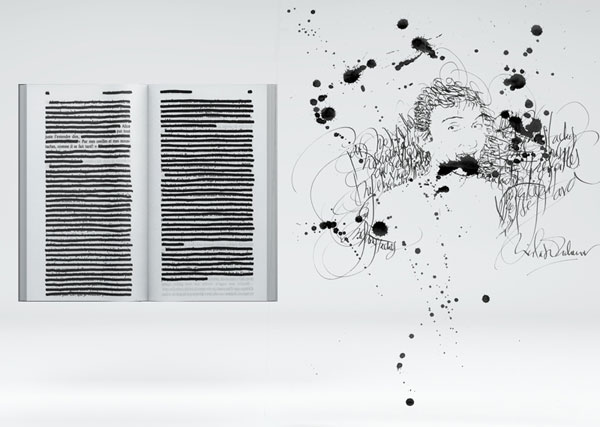