Some seek adrenaline-filled hobbies while others like Michael Hayes, a maths tutor, found the artistic skills required for calligraphy a more relaxing pastime.

To complement his study of Chinese language, Hayes, 43, started practicing the zen-like art of Chinese calligraphy and has now been crowned national "brush pen" calligraphy champion in the Confucius Institute's annual competition.

"To come out as number one was very satisfying, but quite surprising," Hayes said.

The mathematics tutor said he felt honoured to be named top of such a high calibre of entrants after attending classes once a week at the Confucius Institute's branch at the University of Canterbury.

Hayes said the hobby was "probably not first on people's list" but thought an understanding of Chinese culture was useful as China became more important in global affairs.

"Of course we are writing words which have a meaning, often poetic things or quotations from classic Chinese literature, but it's very much a piece of art like a painting.

"It's about learning how to put the strokes together into a beautiful character, that has a lovely poise, balance and style to it."

The Confucius Institute operates globally and aims to promote Chinese culture and language, with its Canterbury branch run in partnership with the University of Canterbury and the Huazhong University of Science and Technology in Wuhan, China.

"We have organized the competition for six years, and for several competitions students from Canterbury have done very well."

Hu said Hayes' avid interest in Chinese culture was a big factor in his success. 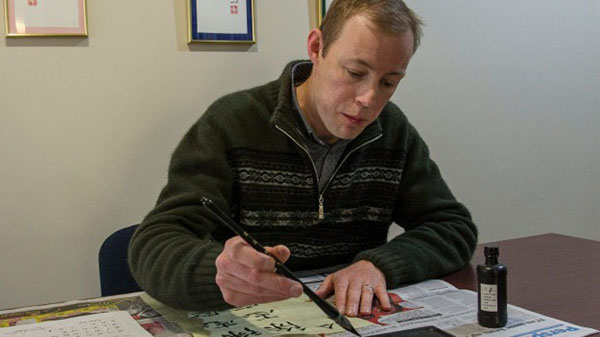