Calligraphy beyond architecture and manuscripts

A plethora of artifacts from Islamic culture that portray Arabic-Persian inscriptions on multiple mediums, besides paper and stone are on display here at the National Museum.

An exhibition titled ‘Art of Calligraphy and Beyond: Arabic and Persian Inscriptions on Decorative Art Objects’ explores the “art of fancy lettering of a script” on materials other than the conventional manuscripts and architectural monuments.

The Union Minister of Culture and Tourism Mahesh Sharma recently inaugurated the in-house exhibition in the museum.

“We wanted the audience to see that calligraphy is not confined to manuscripts or architecture. So this exhibition takes the art form beyond that,” said Anamika Pathak, who has co-curated the exhibition with Zaid Ansari.

The 56 objects on exhibit, range from costumes, textiles, woodwork, metal instruments and utensils, and were created with exquisite surface ornamentation for daily, ceremonial and occasional needs of royalty and for the common man.

‘Choga’, which has inscriptions in the Naskh script of Arabic, is a 19th century silk gown woven with metal threads.

From the same period and with inscriptions in the same script, a cotton ‘Talismanic Tunic’ from the Deccan region was also on display.

Besides need and luxury, these artifacts also serve as testimonies of social and cultural lives of different historical periods, often offering an insight into the process of development over time.

“The exhibition deals with the utility of art in Arabic and Persian calligraphy. While some pieces talk about the date, others speak about the periods like the Jahangir period and the Shah Jahan period, the earliest piece belonging to the Sultanate era,” Pathak said. 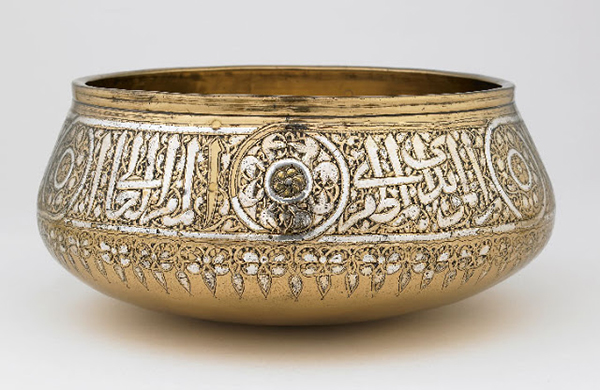 Calligraphy beyond architecture and manuscripts