Calligraphy, one of the most ancient expressions of Islamic art, continues to be celebrated across the world. With the passage of time, the old traditional art has been revamped with the help of modern techniques, mediums and brush strokes, taking the revered Islamic art to a whole new level. This treatment of artistic expression can be seen at Grandeur Gallery, where 14 artists have displayed their unique takes on calligraphy.

Among the many facets of the work on display, a common yet heightened feature of all the works was the use of colour. Not just simple, cool pastel colours, but brilliant, shimmering ones. The work of Firdous, the artist, therefore catches one’s eye instantly as his texts, encapsulated in a classic seal-like design coupled with other verses laid out in elongated fashion and backed by booming contrasting colours, have a festive touch on the canvas.

Speaking about his inspirations, Firdous said that artists have to be very cautious when it comes to the use of colour in their work. “My calligraphy represents nature,” he said. “The colours of day and night and water are representative of landscape.” The artist, who was trained in Iran and has been involved with calligraphy since 1988, said that colours and calligraphy share a bond that is not escapable. “Calligraphy is all about nature and everywhere you look around you, nature gives you colours.”

Depicting festivity and celebration, RBM Ali, whose work is a combination of texts and ornamental stones, transports the viewer through the rich Islamic heritage of Persia and Turkey. Stones in the shades of blue, black and brown are patterned in a form of pavement, as though one is walking over it, touched by the charm it provides.

Another artist, Jamshed Khan, showed one of the most refined forms of calligraphy, in which verse and texts appear like a huge wave of blues and greens coming out of the canvas. “It is the 3D effect of his painting that makes the work so different,” said Neshmia Ahmed, the owner of Grandeur Gallery.

While the verses and texts were easily decipherable in other canvases, it was their decorative treatment that enriched their significance. Almost all sorts of mediums from pencil to acrylic and marker were put into effect to give the impression of the contemporary brush strokes that complement the ancient yet respected texts. Ahmed said that calligraphy has been given a different treatment by these artists and the works are garnering a lot of appreciation from the visitors. 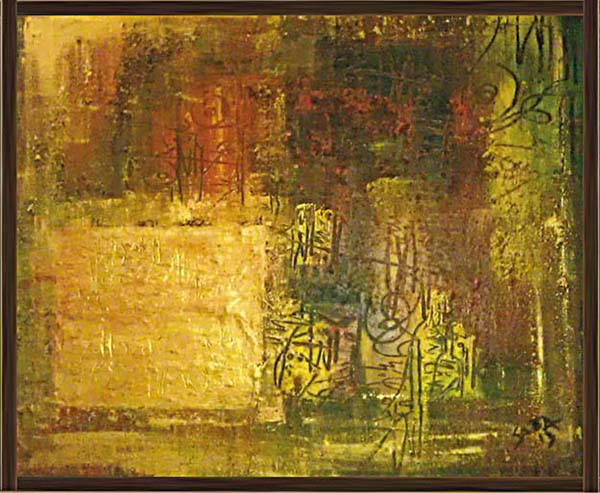