A solo exhibition of work by Chinese ink artist Qin Feng unfolds across three locations in Venice from May 19 until June 19, 2016. ‘Waiting For Qin Feng’ is installed at the former Monastery of San Giorgio Maggiore — now home to the Giorgio Cini Foundation; the Armenian catholic monastery on San Lazzaro Island; and Venice International University on San Servolo Island.

Presented in collaboration with the Fondazione Giorgio Cini, the exhibition coincides with the Venice Architectural Biennale 2016. This edition’s theme ‘Reporting From The Front’ calls on architects to consider their role in improving living conditions — an idea echoed in Qin Feng’s exhibition, as it promotes cultural interaction and a greater understanding of our contemporary civilization through open dialogue.

Qin Feng’s experimental ink brush painting results in emotional and explosive images that seamlessly blend ancient Chinese calligraphy with Western abstract expressionism. With roots in two parts of the world — having lived and worked in Germany and the United States — Qin Feng’s compositions and dramatic installations prove the continued relevance of traditional brush and ink as mediums, through an artistic language that remains respectful of ancient models.

The exhibition across Venice is expressed as a dialogue between European Renaissance and contemporary Chinese art, manifested through performance, installation and digital media.

Qin Feng hopes that the exhibition becomes a ‘silk road’ for promoting economic and cultural understanding. The northwestern Chinese city of Xinxiang — Qin Feng’s home — was one of the stops on the ancient trail, and his keen awareness of the route’s role in connecting disparate cultures has had a significant influence on his creative work. 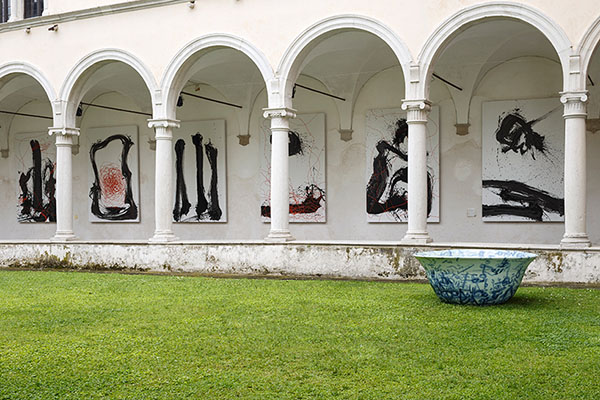