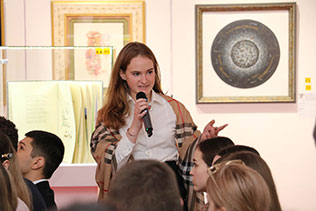 “Be Grateful - Serve the Society”

Since 2006, the Sokolniki Cultural and Exhibition Center has been implementing the “Be Grateful - Serve the Society” program, aimed at developing civic qualities and shaping the social and cultural activity of young people.

The purpose of the program is to train young leaders for the future of Russia, people with a high sense of patriotism, social responsibility, sacrifice, who value work, history and culture of Russia within the framework of business projects and social projects implemented by Sokolniki Exhibition and Convention Center.

- Passing the program “Be Grateful - Serve the Society” requires responsibility and dedication.

- The program participants are future specialists striving to engage in community service and creative activities, focused on personal and professional growth, preservation and strengthening of universal human values. 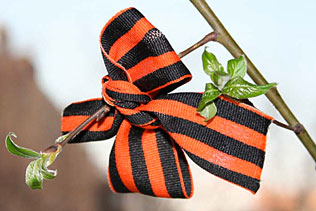 The mission: let the veterans feel our love and care all the time. On Victory Day let them feel proud of our country and its younger generations.

Through Our Victory project, Sokolniki Exhibition and Convention Centre gives its support to veterans, its care and appreciation for their courage and heroism during the war. The project’s motto – “No one is forgotten, nothing is forgotten”. Also, our company launched a website that allows you to learn more about the immortal feats of the Soviet people.

The website is adorned with biographies of the marshals and admirals and descriptions of the outstanding feats of the selfless defenders of the Motherland. Creators of the website have not forgotten to gather the information that allows the veterans’ children and grandchildren to distinctly imagine everything their grandparents passed through for a peaceful sky over our heads. The site contains reviews of movies and documentaries, information about museums, the central part of which is the Great Patriotic War; annotations of books describing the war; posters, cartoons, and most importantly, war photos. On the site you can listen to war songs. To top it all, a separate section provides information on the St. George's Ribbon campaign with a list of locations the ribbon can be obtained. 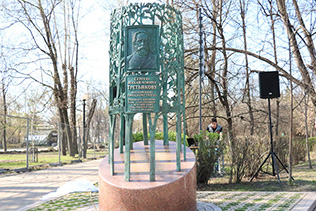 A memorial sign to honour the 19th century Moscow city governor, collector and social activist Sergey Tretyakov was installed next to the main entrance of Sokolniki Park on April 24, 2019. Thanks to Tretyakov's efforts, today's area of Sokolniki park was admitted as a part of Moscow.

To create the park, the city had to buy out the areas occupied by Sokolnichya and Olenya groves, previously owned by the Ministry of State Properties of the Russian Empire. Alexey Shaburov, President of the Museum and Exhibition Centre “EcoCentre Sokolniki”, collector and Director of the World Calligraphy Museum, sponsored the sign in honour of the renowned Russian patron of art, which was erected upon the decision of the Moscow government. 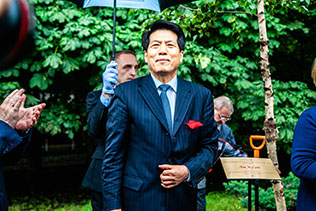 Tree of Friendship planted in Sokolniki

Mr Li Hui, Extraordinary and Plenipotentiary Ambassador of the People's Republic of China to the Russian Federation, Lubov Dukhanina, Deputy Chairman of the State Duma Committee for Education and Science and Alexey Shaburov, President of the Sokolniki Exhibition and Convention Centre, Director of the World Calligraphy Museum took part in the ceremony. 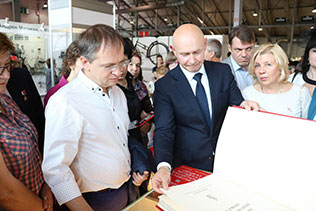 Sokolniki Exhibition and Convention Centre has held the first ever Russian exhibition that featured over a hundred of private museum owners from all across Russia, from Kamchatka to Kaliningrad – “The Private Museums of Russia. Talents of Russia.” Its exhibit included a few thousand unique items that have never been displayed in Moscow before. The event aimed to demonstrate the wide diversity of the national Russian culture and its regions, introduce traditions, and unlock new knowledge about its history, geography and culture.

The Minister of Culture of the Russian Federation, Vladimir Medinsky, took part in the opening ceremony noting the role the private museums play in the cultural sector, and wished good prospects and prosperity to the exhibiting talents. “Those who put out their effort, time, talent, knowledge and money in order to preserve the memory of the invaluable treasures our country owns and our culture generates, for future generations – thank you so much!” 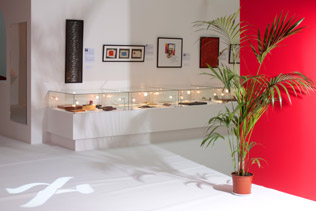 The project mission is to form a beautiful and healthy society.

The World Calligraphy Museum was initiated by Sokolniki Exhibition and Convention Center. Throughout the world, including Turkey, China, Japan and the UAE, there are museums displaying permanent calligraphy expositions. There were, however, no such museums in Russia yet. The Museum was officially opened on 14th August, 2008.

The Museum exposition presents some unique samples of the lettering arts and the world’s masterpieces created by recognized calligraphy masters. The Museum holds regular workshops by Russian and foreign calligraphers, concerts and evenings with famous artists. The National school of calligraphy working at the Museum teaches both adults and children the art of beautiful writing. The World Calligraphy Museum is the organizer of the largest project in the world dedicated to the art of beautiful writing – the International Exhibition of Calligraphy. 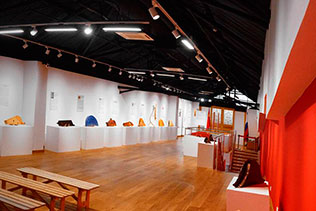 From the very outset, the collection was designed to be unique in terms of concept and content – a museum of plucked musical instruments that would introduce the cultural roots of our countries. We would like this traditional museum to aim at contemporary visitors meeting their expectations and demands, and in this regard our goal is to do everything we can to translate the understanding of the great value carried by the Russian and the Chinese cultural heritage, to local and international guests. 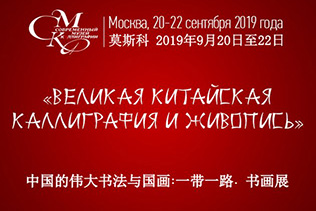 Great Chinese Calligraphy and Painting: One Belt – One Road exhibition

The Great Chinese Calligraphy and Painting, a large-scale exhibition project organized by the World Calligraphy Museum, has gained support and recognition from key federal ministries and agencies. China and Russia are two major neighboring countries and today’s most important comprehensive strategic partners, pursuing a wide range of common interests. Cooperation at the regional level is important for their relations: stronger ties at sub-national levels result in a more solid base for mutually beneficial interstate cooperation. 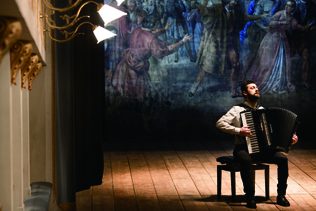 Our mission is to increase society's spiritual riches by means of generating interest in the art of accordion and instilling a love for music.

This is our new educational project, dedicated to a wonderful musical instrument that has won many a heart across the world. The museum will feature exclusively contemporary accordions from the world’s best manufacturers, featuring various country-specific sounds, sophisticated engineering solutions born out of a constant search for perfection, and exquisite design created with love and care. Contemporary accordions will tell you a fascinating story of diverse cultures, rich expressive means, and a deep devotion for music! The museum is scheduled to be opened in spring 2017. At present, exposition preparation works are underway; a series of promotional events will be launched in the near future. 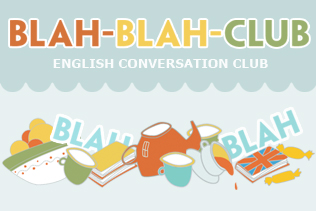 The mission: to afford a unique opportunity to learn and improve English in vivo not leaving the native city.

BLAH-BLAH-CLUB is the only club in EAD of Moscow visitors to which may improve their English skills directly with native speakers. A priori the Club’s foundation has been dictated by the need to improve the Sokolniki Exhibition and Convention Centre team’s English conversation skills. But during its organization it became obvious that we may share a format designed to improve language skills with all those interested. Such language practice including various multimedia tools and well thought-out methods to discuss certain topics are intended to produce maximum effect on those learning English. A format of tea and friendly atmosphere transform a casual English lesson into rest. The project took place in 2012. 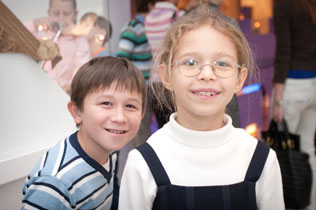 On New Year’s eve, the Exhibition and Convention Centre collects gifts for orphanages. Throughout the year orphans and children with disabilities are welcome to attend any events held in Sokolniki on special terms. The World Calligraphy Museum which is the heart of Sokolniki Exhibition and Convention Centre regularly takes part in charity fundraisers. In addition, free guided tours and workshops for orphanages and children with disabilities take place at the Museum. Learn more about special tours at the World Calligraphy Museum. 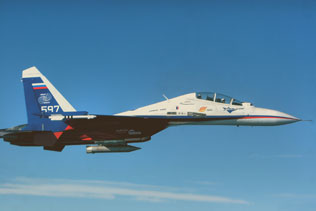 The mission: the consolidation of position of Russian enterprises on the domestic and international markets. The organization of the exposition in the stratosphere in commemoration of the 70th anniversary of the great flight by Valery Chkalov represents a vivid demonstration of the patriotic spirit and leadership, characteristic of the exhibition centre.

The project brings together two interrelated events: Exposition of the MVK achievements in the stratosphere (held at a height of over 12,000 m) and a non-stop flight by the Hero of Russia, a distinguished test pilot, Anatoly Kvochur following the itinerary Moscow — the Isle of Chkalov (the Far East) — Moscow on board a Su-30 plane. The occasion linking these two events is the 70th anniversary of the first non-stop flight across the Atlantic performed by V. Chkalov in July 1936. 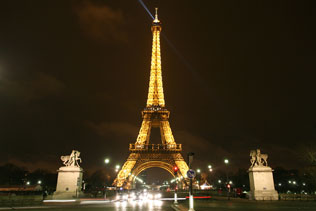 The goal of the presentation: to demonstrate the value of exhibitions as the principal way of acquiring information, studying and mastering the Russian Federation market. It contributed to both strengthening bilateral cooperation between Russia and France and extending the presence of French companies in the Russian market.

On the same day, another extraordinary event took place in the Russian village of Paris of the Chelyabinsk Oblast. The TWO PARISes project met all expectations, the exhibition was held simultaneously in France and in Russia. It contributed to strengthening cultural relations and played an important role in establishing new favourable conditions for economic cooperation between the two countries. 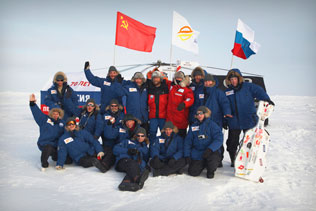 The mission: Binding together the thread of historic events, Sokolniki Exhibition and Convention Centre becomes a bridge between the past and present – uniting, forming and promoting. Uniting unique personalities of all generations, leading businesses, and all progressive forces. Forming an active life position and reverent attitude to one’s own country. Promoting self-perfection in life and business.

In April 2007 the Mobile Polar Museum project was launched, dedicated to the history of the legendary “four” under the command of Ivan Papanin and heroic flight of Valery Chkalov and Mikhail Gromov crews across the North Pole. The museum opened directly at the North Pole. Papanin’s tent copy became the museum’s main exhibit. Having absorbed a unique aura of the North, the exposition of the Mobile polar museum visited the largest exhibitions in Moscow, Yekaterinburg and Rostov-on-Don — the exhibition was attended by over 400,000 people. Expeditions dedicated to the International Polar Year were held in the same year. Mobile polar museum exhibits with hydronauts of high-latitude expedition “Arctic 2007” visited the bottom of the Arctic Ocean at a depth of 4261 meters and on the NP-35 drifting station. 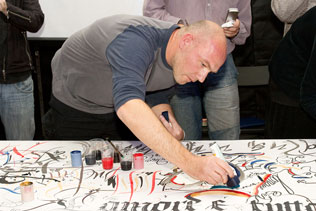 The International Exhibition of Calligraphy, since 2008

The mission: to keep the unique art of calligraphy alive for future generations. In 2008, Alexey Shaburov initiated and has been successfully implementing ever since the world’s largest project dedicated to the art of beautiful handwriting – the International Exhibition of Calligraphy. Its every step is a significant event in Russian cultural life, and life in the art community around the world. To date, the project involves one hundred and forty-three calligraphers from forty-four countries.

The same year, saw the foundation of the within the project, as well as the opening of the World Calligraphy Museum. In 2009, the museum became an institutional member of the International Council of Museums (ICOM), and in 2010 the country’s first National School of Calligraphy was founded on the basis of the museum. 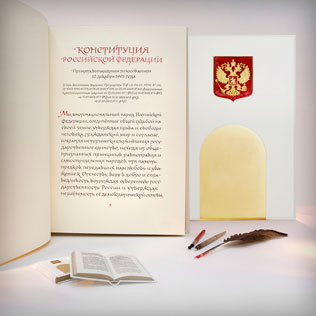 The first handwritten Constitution of the Russian Federation, 2008

In 2008 the World Calligraphy Museum initiated the creation of a unique exhibit — the first handwritten Constitution of the Russian Federation.

This is a collective work of a whole group of calligraphers and editors led by the chairman of the Presidium of the National Union of Calligraphers, Petr Chobitko. The creation of the first handwritten Constitution of the Russian Federation is a part of the socio-educational project “The International Exhibition of Calligraphy”, initiated by Sokolniki Exhibition and Convention Centre. The elegantly designed, hand-written version of the Basic Law promises to be a worthy symbol of the rebirth of Russia, a landmark in the history of national book publishing and the history of the Russian statehood. At the moment the handwritten masterpiece is exhibited at the World Calligraphy Museum.