Days of Korean writing in Moscow

An exhibition dedicated to the 25th anniversary of Russian-Korean diplomatic relations and to the Korean Alphabet Day opened in one of the exhibition halls of Arbat.

Korean Alphabet Day is celebrated nationwide in Korea. On that day the Hunmin Jeongeum was published, which marked the establishment of Hangeul, the Korean alphabet. The alphabet was created in 1444 under the directions of King Sejong of the Joseon dynasty. Hangeul is comprised of unique letters and specifically arranged syllables and is easy to use. Thanks to this efficient invention the Korean population was introduced to reading and writing.

The exhibition dedicated to this day is a must see for scholars as much as for everyone interested in the Oriental culture. Workshops on Korean calligraphy will bring Russian citizen even closer to the origins of Korean culture.

Kim Jong Chil is a world-famous Korean calligrapher, participant of numerous international exhibitions, winner of national Korean art awards, and chairman of the judges for various art awards. It’s not the first time that he comes to Russia to hold workshops. This year the master promises to present a very intense and challenging programme.

Moscow’s audience remembers Kim Jong Chil for his works in which he incredibly combines Russian and Korean letters, arranging quotations from Pushkin and Tolstoy.

Russian writing reminds Kim Jong Chil of singing. He is sure that the Russian language like no other contains ideas that should be made paintings. Another know-how of the Korean master is the use of colour. Traditional calligraphy only uses black, but after Kim Jong Chil had heard Russian singing he couldn’t make do with just one colour.

The master’s works are as always very philosophical and praise the timeless human values of love, kindness, the creative power of thought.

The exhibition will be open for visitors till the end of October. 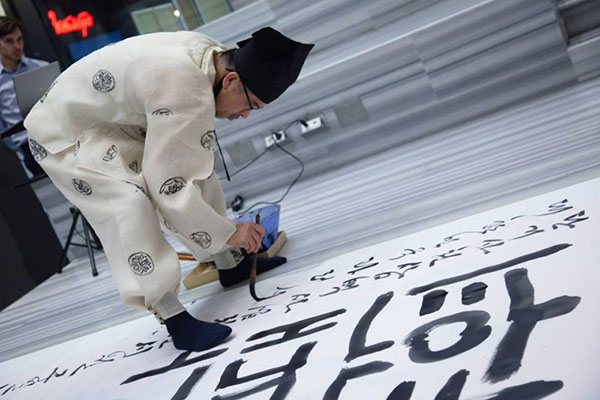 Days of Korean writing in Moscow