Calligraphy is one of the highest art forms of the Arab world and a primary form of Islamic visual expression and creativity. Having spent years admiring the grace and elegance of this decorative writing at various galleries in Dubai, we tried our hand at Ductac’s Arabic Calligraphy and Islamic Borders class.

Taking place over four weeks, the course is open to all levels, from beginners to more experienced artists. New students can drop by for any session. Led by artist and calligrapher Fatima Nadia Rehman, the course is designed to introduce participants to the art of Arabic calligraphy, covering basic lettering and numerals, with the end result enabling attendees to incorporate the skills into their own artworks.

Having studied art at a university in Philadelphia, USA, Fatima has spent ten years painting and learning the craft of what is often considered a dying art. “The art of Arabic calligraphy is a skill that people practice for beautiful writing, enhancing their artistic skills or to use it in their jobs. The exercises are also very meditative, so many come just to relax.”

During the first class, students are taught how to write the Arabic alphabet using the Thuluth script – a medieval Islamic style of handwritten alphabet. This large, cursive script is often found in mosque decorations and in religious inscriptions. “There are eight or nine different styles of script, but calligraphers mainly write with the Thuluth script. This is the second oldest and it is also used for many of the large copies of the Qur’an,” explains Fatima.

Fatima starts the class with some background knowledge on the history of Arabic calligraphy and explains that calligraphy is based on geometry. Each of the pens used in this class are made from bamboo and come in various sizes. “The Thuluth script is known as one of the most difficult scripts in the world to write. I teach it because it’s beautiful and it has thousands of formations. Once you know this script, you can easily do the others,” says Fatima.

Starting with the letter ‘A’ in Arabic, also known as ‘Alif’, we attempt to follow a worksheet that Fatima has given us, practicing each letter step by step. After each class, students are given homework summarizing the steps that have been learnt during the session.

The second and third sessions are a continuation of learning the alphabet, and by the fourth class students are able to do the basic joining of letters. At this point, Fatima will give students a variety of books to decide whether they want to make a painting or continue on to advanced calligraphy.

While we do find the class difficult at times, mainly due to the intricacy of the lettering, it’s also surprisingly therapeutic. After spending hours attempting to craft the art of calligraphy, we can see why it’s an esteemed art form in the Arab world. This is most definitely a class worth trying for cultural and artistic types. 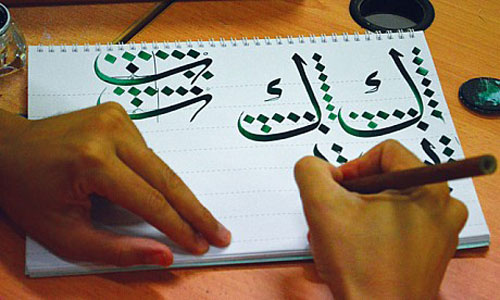