Calligraphy And Choreography Merge In These Magical Light Paintings

A self-trained calligrapher, Breton says that he spent the first five years of his career working on paper, but he felt as if he was missing something: he wanted to put his entire body into his art. "Light painting solved all the problems I'd been facing," Breton says. "It gave me the ability to work with my entire body on much larger scales than traditional calligraphy, and create three-dimensional works."

Light painting is done in a dark setting by waving a light source in front of a camera that has been set with a long exposure and a high ISO. When the image is developed, the motion of the light blurs together, sinuously combining several moments in time into a single image. The painter himself dresses in dark colors, and keeps in constant motion. If it's done right, the painter will become nearly invisible in the finished image, while the light painting itself seems to hover like a neon ghost in the dark.

To create his light paintings, then, Breton first needs to exhaustively train himself to turn his calligraphy into a meticulously choreographed dance. When Breton has prepared his choreography, he chooses a scene for his painting, usually in Arabic-speaking countries like Egypt or Morocco. He then works with light photographer David Gallard to record his fluorescent dance as a finished image.

Asked why his calligraphy is in Arabic, which is not Breton's native language, the artist says, "I'm not able to speak Arabic, but it's clearly perfect for light painting." The fact that, at least to Western eyes, Arabic helps make Breton's finished light paintings seem all the more otherworldly, like spells out of Arabian Nights? Just another small perk. 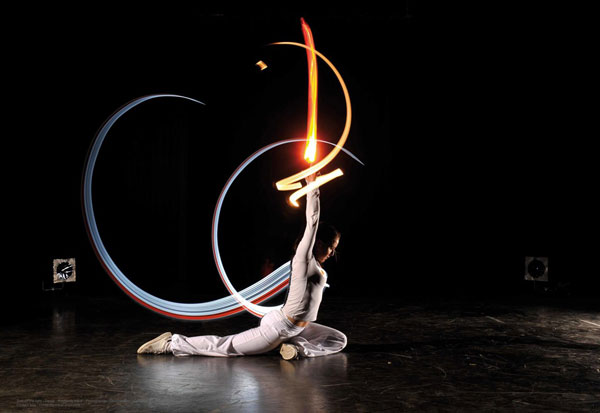 Calligraphy And Choreography Merge In These Magical Light Paintings