A different form of calligraphy

A very different form of calligraphy emerged at the Chawkandi Art Gallery in a show titled, ‘Other Histories’, a collaborative project with Tariq Ali, a British-Pakistani writer and journalist.

The exhibition, a travelling show, has come from Canada and will be heading to Lahore next. Artist Amin Rehman has given different treatments to the age-old traditions of calligraphy. He has experimented with diverse forms of mediums and complemented the texts with stylistic writing not common to the eye. All calligraphic treatment has been done on the texts of Ali, whose narrative is based on issues of global politics and the realities of the 21st century.

The technique of script within scripts is the first thing that strikes the viewer. Like a story running parallel to a story, the calligraphic display is written in Urdu-styled English with its distinctive dots and extensions.

Commenting on the complete journey of Rehman’s artistic life, curator Amra Ali said that Rehman’s work converses with many traditions at the same time. “When the difference between local and global art has blurred, Rehman’s work remains different from what you see in the international market,” she said.

The other different treatment is the artist’s use of non-traditional mediums: bee wax, vinyl and mix media (slabs composed of wood and plastic) containing messages such as ‘Speak up from your grave’, ‘History begins with us’ and ‘Between Past and Future’. The exposition also features video installations.

According to Amra Ali’s curatorial essay, Rehman’s and Ali’s collaboration provides a great learning opportunity for those looking for a third dimension to the world view.

The show runs till November 14. 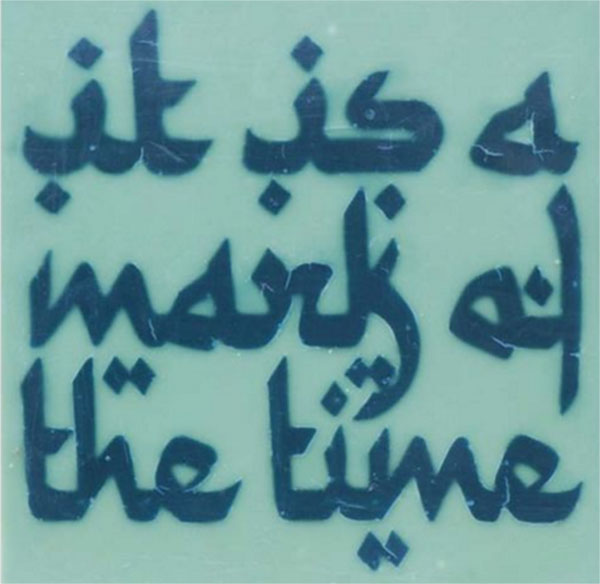 A different form of calligraphy