Robert Palladino’s name appears nowhere in Steve Jobs’s lengthy authorized biography, but he had an enduring influence on Jobs and the business empire he erected.

Jobs sat in on Palladino’s calligraphy class at Portland’s Reed College, which eventually inspired the elegance for which Apple computers are renowned, the tech icon recalled in his famous 2005 commencement address at Stanford University.

“If I had never dropped in on that single course in college, the Mac would have never had multiple typefaces or proportionally spaced fonts,” Jobs said.

Palladino himself had honed the craft over nearly two decades of monastic life. He joined the Trappist order of monks in New Mexico in 1950. Just 17 at the time, his handwriting attracted the attention of the monastery scribe, who worked with him on his art.

Five years later, Palladino moved to Lafayette, Ore., where local artists brought news of a skilled amateur to Lloyd Reynolds, an icon in the field and the creator of Reed’s calligraphy program.

The future Apple co-founder enrolled in Reed College that year, but dropped out after a single semester. He remained on campus, however, to attend classes that interested him.

“Throughout the campus every poster, every label on every drawer, was beautifully hand calligraphed. Because I had dropped out and didn’t have to take the normal classes, I decided to take a calligraphy class to learn how to do this.”

“10 years later, when we were designing the first Macintosh computer, it all came back to me. And we designed it all into the Mac.”

“My first impression was that all the other students really liked him. That surprised me, because there were all these geniuses floating around, and Steve was a dropout. But they detected greatness even then.”

Their relationship outlasted the class, too, Palladino recalled in the 2008 oral history interview.

“He came back afterwards and consulted me about Greek letters for a type font,” Palladino said. “I don’t know if he ever used my Greek letters, or if he just used them as a starting point, but we had a good time. He was educating me about what a computer is, as I hadn’t the foggiest idea what he was talking about.”

Despite his decades working for the church and teaching scores of students, Palladino knew his legacy would be as the man whose art inspired an iconic brand — ironic though that may be.

“Ethically, Steve was as nice a guy as you could meet,” Palladino told the Hollywood Reporter in 2011, after Jobs himself died. “A real nice fellow.”

The publication noted, however, that “Palladino’s attempts to get back in touch with Jobs after fame struck were rebuffed by Apple, whose office responded with a silence stonier than any Trappist’s.” 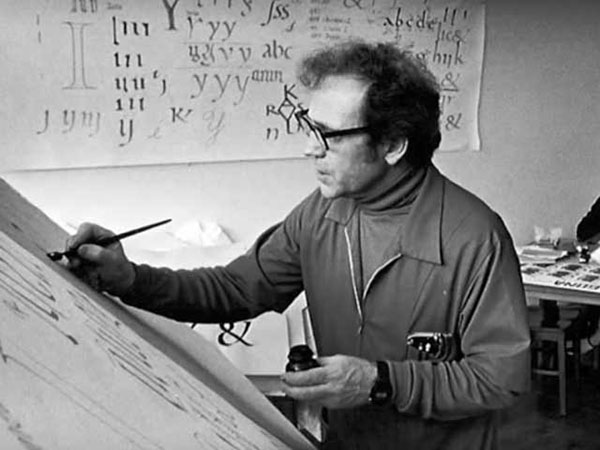